Open one of these in Adobe Reader, resize the reader, resize the fonts, and open the bookmarks. Is this design workable on your screen? Pick your favorite real analysis topic, look it up in the index, click to see the text and scan a couple of pages. Any suggestions?

Help 2?
Specifically, does anyone know how to work around the fact the the LaTeX packages endnote and hyperref ignore each other? That is one of the bugs in my on-screen version. SEE NOTE in yellow doesn't link forward to the hint in the NOTES. I do have a link back though.

Help 3?
We are working on a PRINT-ON-DEMAND service for all three of these titles. Does anyone have stories, good or bad, to relate about CreateSpace, the new Amazon.com service?

[Some students in a class in the midwest used the on-screen versions for their assigned text, but most ended up finding used copies anyway. So, if this is a common reaction, we are trying to supply inexpensive trade paperback copies. Or, perhaps, we just needed a better on-screen version.]


The texts here are Elementary Real Analysis and Real Analysis by Bruckner, Bruckner and Thomson, previously published by Prentice Hall (Pearson) in 2001 and 1997. Full versions of these texts (recently corrected) are available as free downloads.
Posted by Unknown at 4:48 PM No comments: 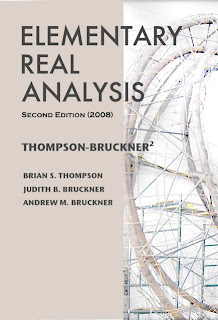 This one is a little more conservative. Very elegant, but I think I prefer the other two.
Posted by Unknown at 10:21 AM No comments: 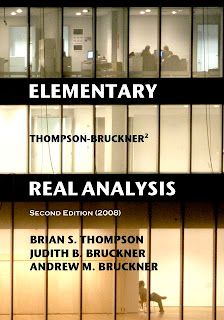 I think this one is my favorite though. Anyone have an opinion that you would like to share?
Posted by Unknown at 10:16 AM No comments: 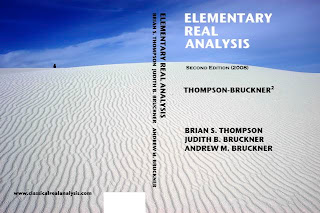 We are currently selecting our cover designs for the trade paperback copy of Elementary Real Analysis.

[I am negotiating with my colleagues to correct the spelling of my name.]
Posted by Unknown at 9:48 AM No comments:

I have posted some old examinations and homework assignments for courses in Elementary Real Analysis that I taught in the past. You can download them directly from here

There is a lot of material, with a high level of redundancy. If you are a student of real analysis at the undergraduate level it might be useful to try some of the examinations as part of your review. Any instructor who wishes to steal any of this material for their own use should likely ask for the LaTeX source file from me, since that will be a lot easier to pilfer from.
Posted by Unknown at 11:35 AM No comments:

#9. Does the phrase "mildly interesting exercise" suggest anything?


The quoted remark is from Jean Dieudonne, the French mathematician and well known Bourbakiste, in his dismissal of the Riemann integral as a suitable object of study for undergraduate mathematicians.

Actually I find the history itself more than mildly interesting and, with your indulgence, will give a fractured account of it here. What happened to Riemann follows a pattern that I can describe this way:

Suppose that you (Jones) discover an old theorem of Smith that you think you can improve on.

Theorem [Smith] Every object Y has the property Z.

You (Jones) decide that it might be worthwhile to characterize this property Z, especially since Smith seems to have gotten some fame from it. You succeed and write it up like this:

Definition [Jones] We say that any object possessing the property Z is a zamboni.

Theorem [Jones] A necessary and sufficient condition for an object to be
a zamboni is [insert your characterization].

Corollary [Smith] Every object Y is a zamboni.

Thus you (Jones) have, with a stroke of the pen, transformed Smith's theorem into a trivial corollary of Jone's theorem.

The success of Jone's manoever here is whether zambonis are going to have any lasting interest. If they do and prove to be a significant concept, then your fame exceeds Smith's, even though Smith had the original insight. If zambonis fall flat on the mathematical world then move on to something else.

Well, Riemann's zamboni is his integral. He took a theorem of Cauchy asserting that every continuous function on a compact interval [a,b] had a certain property with regard to its integral. He then characterized that property and gave it a name. Hence the definition of the Riemann integral, Riemann's characterization of integrability, and Cauchy's theorem dropping down to the status of a corollary. In fact the sums that Cauchy had used are now called "Riemann sums," so history has taken all the credit from Cauchy and shifted it to Riemann.

Well Riemann doesn't need that credit since he did far better things. Even the Riemann integral was just a throwaway in a 1854 paper about trigonometric series and not anything that he likely spent too much time thinking about. If he had seriously directed his enormous intellect at the problem of integration itself he would certainly have discovered the correct integral.

Unfortunately for Riemann, however, is the fact that this particular zamboni was misguided. Certainly it is a worthwhile professional project to characterize the property that Cauchy had discovered, but it was a sad mistake that future generations employed Riemann's integral as the central tool of integration theory.

At that point the history gets a bit strange. Lebesgue's theory is considered too difficult for some to learn and for many to teach. So many did not teach it, and many did not learn it. In the last 100 years there have developed many different ways to teach integration theory, some not any more difficult than teaching the Riemann integral itself. But, even so, we still don't teach it until graduate school at many places.
Posted by Unknown at 6:02 PM 2 comments:

I put one of the textbooks up on GOOGLE BASE.

Does anyone actually use GoogleBase?
Posted by Unknown at 10:07 AM No comments:

Indeed that's the problem. It is a uniform definition that many insist on teaching in an era when a pointwise definition is universally recognized as providing the correct theory of integration.

Here is a completely trivial theorem. If F has a uniform derivative then F' is Riemann integrable. That's much easier than the usual version in calculus where you assume Riemann integrability and use the mean-value theorem.

Teaching the Riemann integral quickly opens up this little puzzle of pointwise vs uniform conditions. Once this door is open you may as well come clean and own up to the existence of a nonuniform version of the integral that is universally used. Push that door shut to keep out any more of the theory than you are willing to teach, but don't suppress the whole story. You can tell them that the best way to teach this integral is not with this simple definition but by developing Lebesgue's theory of measure, and that only graduate students are considered mature enough to handle such sophisticated ideas. (It's a load of rubbish, but some people apparently believe it.)
Posted by Unknown at 4:28 PM No comments:

It is well-written, user friendly, and free!

I am reading through Elementary Real Analysis by Thomson, Bruckner & Bruckner. It is well-written, user friendly, and free!

His question just arises from the use of the word "continuous" and the discussion flows around how to sort it out. This is a quite normal process in learning a subject as subtle (I wouldn't say difficult) as real analysis. The nomenclature has a strange power to occlude your reasoning at first.

But I like the endorsement. I hope Alan will encourage us to quote him in all our promotions. Although it is an odd activity, to promote an entirely free product, there is some great reward in knowing that your users appreciate both the effort and the price.

Posted by Unknown at 8:58 AM No comments:

We are currently planning on placing our undergraduate textbook, Elementary Real Analysis, on CreateSpace. In addition to the free PDF files that are currently available, this will mean that a Print-On-Demand service can be used to print inexpensive copies.

If anyone has advice or encouragement to offer in this project please send it along. At this stage we can imagine a multitude of things that can go wrong.
Posted by Unknown at 11:29 AM No comments:

Any other titles available?

>| Hey! is it at all possible that you guys are expanding
>| and can get other books available as well, or is this
>| the entirety of your collection. I am asking because
>| I'm looking for a book that you don't seem to have
>| at the moment Thanks -Schwinn

His return e-mail did not work. The answer (if you
are out there) is that what you see are all the titles
that we have available for distribution. We would be
happy to put up other titles in real analysis that could
be distributed for free.
Posted by Unknown at 4:00 PM No comments:

Updated versions of our textbooks uploaded